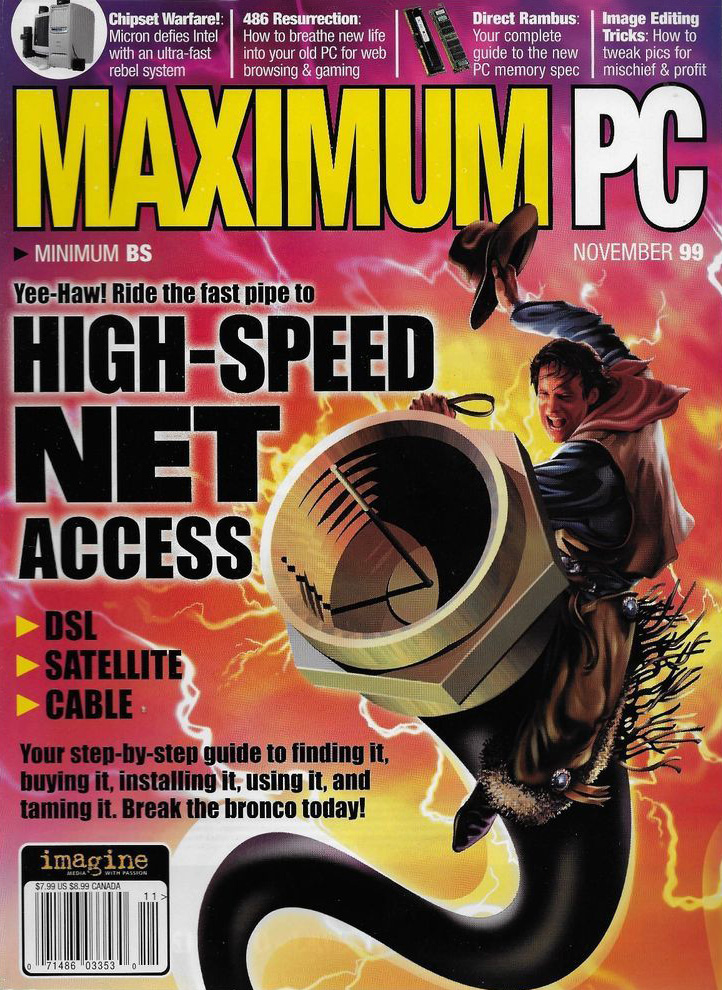 Excitement about a new era of computing intersected the end of the millenium.  MP3’s, CD burners, DVD’s, hardware-accelerated 3D, and broadband.  Computing started to get really fun for non-nerds.  Consumer computers became powerful enough that there started to be specialized systems like the home theater computer and gaming computer.  The “computer” started to become what we now call a “device”.  Steve Jobs envisioned it in his “Digital Hub” strategy.  Bill Gates announced it in his keynote at Consumer Electronics Show.  As everybody partied their way into Y2K, I had the best custom system for its day.  And it would be my last truly personal computer.  Servers and networking became the popular interests for many techies.  Along with this new technology came Maximum PC, a new magazine for the new generation.

By the end of 1999, my personal computer had every upgrade that I could cram into its midtower case.  That computer consisted of the following:

Intel’s Pentium II processor was uniquely cool in that it was a cartridge, called Slot 1, that looked like a Super Nintendo game.  The reason for the cartridge design had to do with CPU cache.  CPU cache is a type of computer memory that is faster to access than regular memory because it is built into the microprocessor itself.  Intel for awhile couldn’t figure out to properly get cache onto the thin square Pentium II microprocessor.  So instead, Intel made a little circuit board, put the microprocessor in the middle of it, and soldered the cache around the microprocessor.  The Slot 1 CPU sat at a 90-degree angle to the motherboard, with the heatsink and fan clipped onto it.  The words “intel pentium II” were silk-screened onto the processor, along with a hologram sticker of a microprocessor, and it really did look cool.  The Slot 1 cartridge design also made installation foolproof in that you couldn’t accidentally bend/break any of the CPU pins while installing it onto the motherboard.  Many computer hardware enthusiasts that remember Slot 1 kinda wish Intel had kept Slot 1.  However, the costs for Intel of having to manufacture a separate circuit board to go with every CPU resulted in Slot 1 being just a temporary fad. 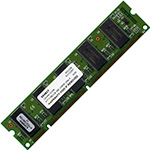 Memory production technology advanced rapidly in the late 1990’s, resulting in a sudden increase in memory sizes and sudden drop in memory prices.  In 1996, my first custom computer had 16 MB of memory.  Just three years later, my new computer had sixteen times as much, 256 MB of memory.  And memory was finally on a single “stick”.  Previously, memory had to be added in pairs.  That 16 MB in my previous computer was two 72-pin sticks of 8 MB each.  The 256 MB memory was a single 144-pin stick.  Advances in computer memory technology in the late 1990’s affected not just the main computer memory, but also memory in the computer’s components.  That includes memory on the videocard and even the CD burner.

Gigabyte is a manufacturer of motherboards with a well-deserved reputation for stability.  I have never had any problems with any Gigabyte motherboards.  In 1999, I had the Gigabyte 6BXE, their final motherboard based on the Intel 440BX chipset.  It had an AGP slot, 5 PCI slots, and 1 ISA slot.  Intel’s 440BX was the first in the 100 MHz chipset.  That meant fewer (and faster) clock cycles than 66 MHz, the previous limit.  The 350 MHz Pentium II ran at 3.5 cycles at 100 MHz instead of approx. 5.5 cycles at 66 MHz.

AGP was the Accelerated Graphics Port that was standard on Pentium II motherboards.  AGP was faster than PCI and made possible more sophisticated graphics cards that could do larger resolutions and higher refresh rates.  However, people often remember AGP for its delicate connections.  The AGP specification had the card’s connectors so close that if the videocard was not inserted completely perfect on the motherboard that it didn’t work.  And it was possible to knock an AGP videocard from being properly installed merely by bumping into the computer.  AGP was rendered obsolete in 2003 with the introduction of PCI Express (PCI-E).

The era of gaming computers most likely originated with a hardware device called the 3dfx Voodoo2.  Prior to that, there wasn’t really any upgrade that could be done to computer hardware that was specific to playing games.  The 3dfx Voodoo2 really was a revolutionary piece of hardware.  The Voodoo2 was an add-on PCI card for games that rendered three-dimensional objects, visual effects like particles, and textures like water and smoke.  I did not own a Voodoo2 but was kinda jealous of anybody that had one.  Hardware-accelerated 3D add-on cards had existed before, but only for business uses like Computer-Aided Design (CAD) and expensive movie effects.  When 3dfx released Voodoo2, it introduced a whole new era in games and other technologies like virtual reality.  The downside for Voodoo2 was that it only worked with games and not many games supported hardware-based 3D when it was released.

Nvidia’s Riva TNT2 Ultra was a successor to Voodoo2.  It had hardware-accelerated 3D features but also did high-end 2D graphics, all in a single AGP card.  Hardware-based 3D effects could now be rendered in a window rather than full-screen-only.  The sudden decrease in worldwide memory prices meant that the Riva TNT2 Ultra had 32 megabytes of memory, thirty-two times as much videocard memory as my previous computer.  Software other than games that used hardware-accelerated 3D graphics started to show up.  Milkdrop was a Winamp visualization plugin that synchronized 3D effects with the music.  Voodoo Lights was a popular 3D-accelerated screensaver.

Quake III Arena was one of the first games that did not support software 3D rendering and required a hardware 3D accelerator like the Riva TNT2 Ultra.  The 3D gaming engine used in Q3Arena made the most of every feature available on 3D cards at the time, like vertex animations, shaders, and volumetric lighting.

Quake 3 Arena is also noteworthy because id software released it as Deathmatch-only.  Deathmatch had existed as a mode of play in many games, going back at least to MechWarrior and the original Doom.  Released in 1999, a deathmatch-only game like Q3Arena made sense because everybody in the U.S. was on the Internet and broadband was becoming more common.  Even the single-player mode of Quake III Arena was deathmatch against computer-controlled opponents.  Ten years after its release, Q3Arena was still popular for online deathmatch games and many people still play it.  Modern 3D online multiplayer games like Fortnite, Call of Duty, Counter-Strike, and Team Fortress are all successors to hardware-accelerated 3D multiplayer games like Quake 3 Arena.

SCSI was a technology for computer peripherals (hard drives, CD-ROM, scanners, etc.) that existed before better technologies like Serial ATA (SATA), Firewire, or even USB.  SCSI was common on Macintosh, but not on PC.  SCSI required a controller card, also called a host adapter, which is a fancy term for “the thing that you plug other things into”.  Adaptec made the best SCSI controllers for SCSI devices, specifically the 2940UW controller card.  SCSI devices worked on their own computing bus, separate from the rest of the computer, as a SCSI “chain”, with up to 16 devices on the chain.  Every device along the chain required being configured with its own ID (numbers 1 through 16).  By having its own data bus, data transfer with SCSI was more consistent and didn’t require waiting on the rest of the computer.

In 1999, an IDE ribbon cable was the standard PC technology for hard drives, CD-ROM drives, CD burners, and DVD-ROM drives.  However, IDE had technical limitations that prevented reliable CD burning.  With IDE, unlike SCSI, data had to go through the computer’s main system bus and get in line with all the other data going through that bus.  When burning data onto a blank CD-R disc using an IDE CD burner, if there was even a slight delay where the CD burner’s internal memory buffer ran out of data then the CD burning failed.  That meant the CD-R disc was unreadable and worthless.  At that point, your blank CD-R was useful for nothing more than a drink coaster.  Blank CD-R’s were still about a dollar each in the late ’90s, so wasting blank discs was not cool.  The problem was even worse using IDE devices for copying disc-to-disc, so-called “Disc-At-Once” (DAO), because you were reading one disc while writing another disc.

As mentioned in Back in the Day #5, the first DVD player I ever owned was a kit that I bought in December 1998 and installed in my computer, the Creative Labs PC-DVD Encore Dxr2.  The kit included a DVD-ROM drive and hardware accelerator card for high-quality DVD movie playback on the computer.  The PCI add-on card that came with the kit enabled high-resolution playback of DVD’s on the computer monitor, but it also had a composite S-Video output on the back for connecting up to a television.  Videocards that did output to television existed back then, notably the popular ATI All-In-Wonder that also had a built-in TV tuner.  I wasn’t really interested back then in using TV output from the computer, though, because television was still way lower resolution than computer monitors (640×400 for television versus at least 1024×768 on the computer).  It was nice, though, to use the PC-DVD’s S-Video television output to watch full-screen DVD movies using the television as a second screen.

At the end of the millenium, servers and other networking technologies were becoming much more mainstream.  File servers were increasingly common, typically as media servers for music and videos.  Broadband was also becoming standard to replace dial-up Internet.  Home networking enabled an entire household to share one broadband connection like ISDN, DSL, or cable modem.  The company 3Com invented Ethernet, which is computer networking.  3Com networking products were as good as it got, and their 3C905-TX 10/100 PCI network adapter was an accepted standard supported by every operating system.  I had a 3C905-TX in my personal computer and consistently used them in every network I configured.

I recall looking at this computer late one evening and meditating about the number of moving parts in it.  There were at least eight moving parts: two hard drives, DVD-ROM, CD burner, CD-ROM, videocard fan, CPU fan, and power supply fan.  Sometimes I would try to use them all at once.  I’d listen to an MP3 from the hard drives, watch a movie on the DVD-ROM, do a disc-to-disc CD burn using the CD burner and CD-ROM, play a 3D game to use the videocard, all while the CPU fan and power supply fan ran non-stop.  These days, computers have no moving parts.  No moving parts means no motors and no noise.  Computers are way more quiet. Maximum PC is the magazine for the new generation of computer hardware enthusiasts.  I discovered Maximum PC when it was new in the late ’90s and still had its original name of boot magazine.  I had my own personal archive of every issue for about a decade.  After awhile, computer upgrades got so powerful that it just wasn’t worth the effort to keep up with it so often.  To this day, though, more than twenty years later, I make a point every month to keep an eye on the magazine rack at the bookstore for the latest Maximum PC.  When its there, I buy it and at least skim every page cover-to-cover.  Maximum PC always knows the best motherboards and videocards and all the other upgrades.