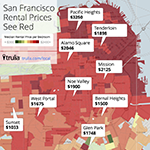 Gentrification in the Bay Area is a popular topic lately.  San Francisco rents are up more than 3 times the national average, reports SFGate.  The cost of living has simply gotten too expensive except for those with well-paying jobs at established companies.  That’s a serious long-term problem for everybody because the high cost of living destroys startups.  Startups, at least in concept, create innovation and new jobs.  No startups means no innovation and no new jobs.  I recent wrote New YC Investments Still Get Same Low Offers Since 2005.  In this post, I’d like to briefly explain why seed money startups may be unsustainable.

Using YC Amounts As An Example

In 2005, $20,000 was seemingly a random amount agreed on by the Y Combinator partners intended to give founders just enough money to create something.  Since 2005, technologies like smartphones, iPhone, and Facebook have all resulted in too many new startups and developers moving to the Bay Area.  Simple economics of a finite supply of housing and greater demand raises the cost of living for everybody.

Doing Y Combinator requires moving to the Bay Area.  A modest one bedroom apartment in the Bay Area costs $1,500/month, according to craigslist.  That’s $18,000 just for rent in the first year.  That’s not including any deposit or utilities.  Factoring in necessary living expenses like food results in a budget well over $20,000.  If a startup had three co-founders and got the maximum $20k from YC, there’d be no money left for any normal business expenses like new laptops, outsourced design work, or anything else.  And this budget presumes all three co-founders spend an entire year sharing a one bedroom apartment.

YC VC is an $80,000 loan that doesn’t convert into an investment unless, and until, the startup raises money subsequent to Y Combinator.  That means startups that accept YC VC either spend all their time trying to raise more money or figuring out a plan to pay back an $80k loan.  That’s time that would otherwise be spent actually working on the startup.  Startups that can’t raise more money probably also can’t pay back an $80k loan.  So eventually you have a bunch of failed startups with debt they can’t ever repay.

The Only Way Out Is Acqui-Hires

Within a year, the startup has burned through what little investment money they had just to keep up with the cost of living.  The money has been spent on basically nothing but rent.  If the startup took out loans like YC VC, then they also have debt.  And so getting acqui-hired is one of the only reasonable solutions for a failed startup.  Acqui-hires are a good deal for the acquiring company because they get an entire team of people they know can work together.  The startup founders likewise get a fresh start and job security.

And The Big Picture Is A Loss To Our Economy

All these acqui-hires means our economy is never much better off.  If employees of big companies like Google or Facebook are the only people that can afford to live in the Bay Area, then there’s never much of a chance of anybody moving out here and creating the next Google or Facebook.  Startups give up before ever really creating anything.  There’s never really any new jobs.  I’d like to believe economic forces could break this ridiculous cycle.  I doubt it, though.  Anyway, startups can’t survive in the Bay Area on $20,000.