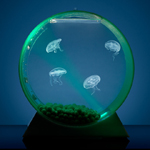 Jellyfish Art, from YCW12, sells moon jellyfish, jellyfish tanks, and jellyfish tank accessories.  They also have a Twitter account.  Alex Andon began Jellyfish Art based on his research catching jellyfish and building aquariums while finishing his B.S. in Biology and Environmental Science at Duke University.  Moon jellyfish require special tanks because they are mostly water.  The tank made by Jellyfish Art uses a filtration system and water flow designed specifically for invertebrates like jellyfish.  It also includes a groovy color-changing LED light with remote.  Jellyfish Art has already won Best Product of the Year at Global Pet Expo, an Excellent Rating by Wired Magazine, and was a top-ten product campaign on Kickstarter.  Watching the jellyfish is very relaxing and hypnotic.

Jellyfish Art breeds jellyfish and makes custom tanks at its new warehouse in San Francisco.  The company, also known as AnyVivo, plans on expanding to become the Amazon.com of pets and plants.  Jellyfish Art and Alex Andon were recently featured on ABC News.  YouTube video is embedded below.