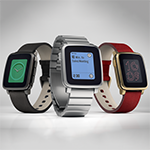 Apple Watch looks interesting and many people will certainly buy one.  The smartwatch market is big enough for more than one manufacturer, though.  Pebble smartwatches are inexpensive, waterproof, and work with both iPhone and Android.  The new Pebble Time smartwatch has a color screen and up to 7 days of battery life.  Pebble the company impresses me most because its a hardware startup with a real product on store shelves.  The company recently announced it had shipped its one millionth smartwatch.  Few hardware startups ever reach mass production.  Even fewer succeed at getting inventory in retail stores.  Eric Migicovsky, Pebble’s chief executive, might consider writing a book for hardware startups about manufacturing and distribution.  Pebble Technology Corp. has a lot of innovation for just one startup.  I’d like to take a moment to appreciate the company’s hardware, software, and business. 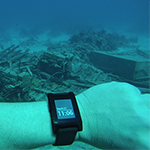 Battery life and water resistance are two things Pebble got right from the beginning.  Several days of battery life means rarely having to recharge.  Water resistance enables wearing the watch in common situations like walking through the rain, sitting in a hot tub, and at the beach.  In contrast, Apple Watch has about 18 hours of battery life and I think a major support issue will be people forgetting to take it off before getting in water.  Pebble Time also supports Smartstraps hardware add-ons through an accessory port, which is a new concept for smartwatches. 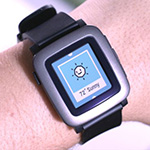 Making a smartwatch operating system is itself an accomplishment.  Pebble could be a successful company even if they just made the Pebble OS and licensed it to other manufacturers.  An operating system is sophisticated software that communicates with hardware, provides user interfaces to interact with the device, and contains programming interfaces so developers can write apps that run on top of the OS.  All of those features must work together and be well-documented.  Developers have written many apps for Pebble’s operating system.  The list of mainstream Pebble developers continues to grow, including ESPN, Yelp, Foursquare, Pandora, and Mercedes-Benz.

Pebble makes real products that you can walk into a real store and buy.  Shipping a million smartwatches requires doing a lot of things well at the same time, including supply-chain management, manufacturing, quality control, and distribution.  Pebble has not just one product but an entire product line of materials and colors.  The company provides customer support and developer relations.  Pebble’s research and development in both hardware and software results in new technology.

A Startup Worth Watching I’ve heard people say over the last year they would only buy a smartwatch made by Apple.  But how do you think a brand like Apple gets started?  I think it’s against the spirit of innovation to not consider products from a startup because you want the assurance of a major brand.  Pebble was arguably the first manufacturer of smartwatches.  The company does three things well, just one of which would be a lot for one startup: hardware, software, and managing a fast-growing business.  Pebble smartwatches are inexpensive, waterproof, have great battery life, and work on both iPhone and Android.  Pebble is an exciting startup worth supporting.  And Pebble is still my favorite smartwatch.