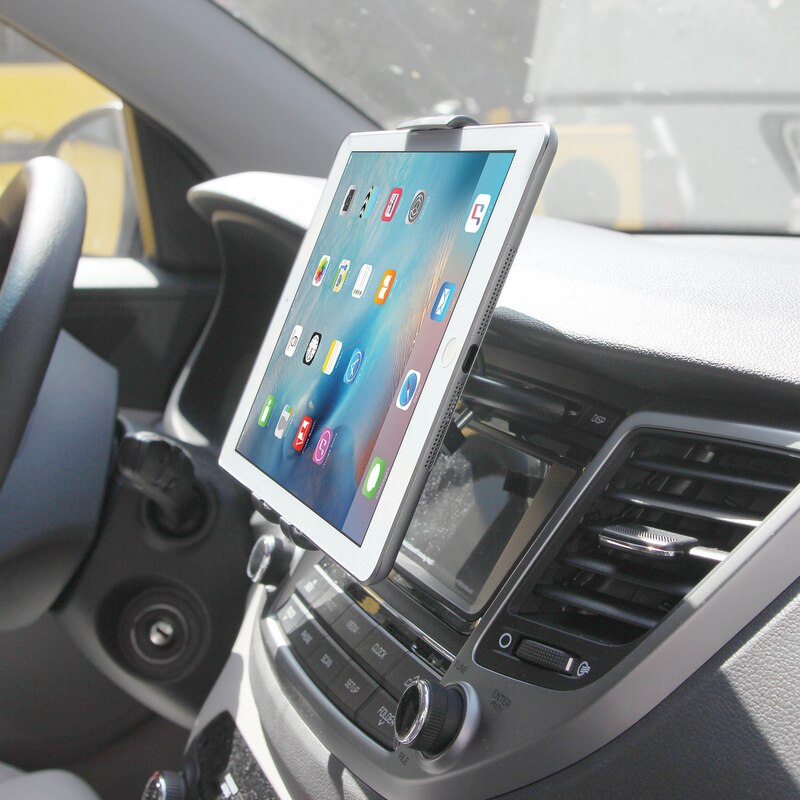 Apple iPad permanently mounted in the car is inevitable.  iOS CarPlay is just a gateway technology for iPad-in-the-car.  The money cost of buying a new iPad and leaving it in the car is already inexpensive.  Probably sooner rather than later, people will no longer connect their smartphone to the vehicle with Bluetooth or anything else.  Car owners will instead just leave the iPad mounted on the dashboard.  The iPad will detect when the driver enters the vehicle and automatically login with the driver’s preferences (music stations, map destinations, etc).  That’s where Apple is really going with its new Car Keys for iPhone / Apple Watch.  iPad-in-the-car also doubles as a convenient wifi hotspot.  Some newer vehicles like Tesla already have those kinds of features.  But even in vehicles like Tesla, the interface is Tesla-specific and you can’t run “real” third-party apps, certainly not the number of apps available on iOS.  I setup an iPad to use in rental cars on several work trips earlier this year and now find it essential.  This post is about the configuration I found that works best, which consists of an iPad with cellular, CD player slot mount, car charger, auxiliary audio cable, two Lightning cables, and prepaid hotspot account.  People are moving, not traveling, this summer, and I have more to write about that.  This is the first in an ongoing series of road hacks. A CD player slot mount is really what made the iPad-in-the-car setup work so well.  Prior experience involving smartphones was that windshield suction mounts fell off and on-dash weighted mounts slid off.  Newer iPads don’t weigh very much so I decided to try a CD player slot mount.  I got a Cellet brand “Tablet CD slot mount” at Fry’s for less than $20 and it worked flawlessly the first time.  The CD slot mount has a tightener knob to keep it from falling out after installing.  The iPad was secure even while driving and going over bumpy roads.  The weight of the iPad makes the mount droop a little bit, but the spherical hinge compensates by allowing the tablet to be adjusted to any viewing angle.  I installed the CD player slot mount upside down, so that it would position the iPad just below dashboard level rather than above the dashboard. 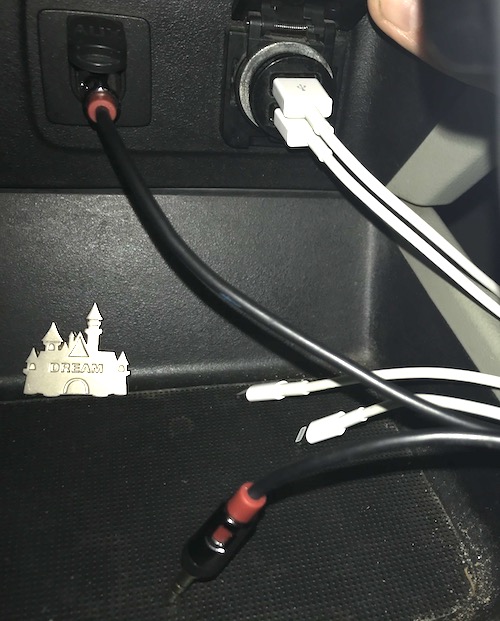 I mention my configuration of car charger, aux audio cable, and two lightning cables, only because of the other configurations I tried that didn’t work.  The initial plan involved just using Bluetooth audio.  My second idea was a single Lightning-to-auxiliary-and-USB-power adapter.

My first plan involved just using Bluetooth audio, but that didn’t work for two reasons.  I tend to watch a lot of YouTube videos, including music videos, and the lag from Bluetooth makes audio consistently about 500 milliseconds out of sync with the video.  Also, even with Bluetooth audio, I would still sometimes need a Lightning cable to charge the iPad.

My second plan involved a Lightning-to-auxiliary-and-USB-power adapter. I tried two different brands, neither of which worked very well.  The audio quality was too low and the USB connection didn’t charge the iPad fast enough if at all.

The auxiliary audio cable was about half-meter in length, just long enough to reach from iPad to car stereo aux connector without much extra length.  For the car charger, I use a dual-outlet charger so that I can leave the iPad charging and still have an extra outlet to charge a smartphone.  For the iPad, a half-meter Lightning cable doesn’t have unnecessary cable length between the iPad and outlet.  For having an extra charger cable handy, a standard one-meter Lightning cable is about the right length to connect a smartphone and be able to move it around and hold it up close. T Mobile has prepaid hotspot plans with no setup fees that start at $10 per month.  The plan that has enough data for me personally is $25/month and includes six gigabytes of data.  I like prepaid cellular service because it means there’s no long-term commitments and no surprises on the billing.  That six gigabytes is plenty of data for downloading maps into Apple Maps / Google Maps, streaming audio, casual web browsing in the car, and occasional laptop tethering.  Getting the prepaid plan is as simple as going into a T Mobile store, requesting a prepaid hotspot account, and installing the new sim card.

Leaving iPad in the Car (Theft and Heat)

It sounds like a big risk to leave iPad in the car in plain view on the dashboard.  But everybody knows these days that Apple devices have the “Find My” tracking features, so nobody wants to steal an Apple device.  The bigger concern is heat, not theft.  If I’m leaving my car somewhere for a short time period (a few hours or less), then I leave the iPad in the mount in the car.  But for when I leave the car somewhere overnight (or when the weather is too hot outside), I keep an iPad portfolio case in the car and either take the iPad with me, leave it under the seat, or in the trunk.

iPad in the car works great.  Dark mode in iPadOS looks especially cool when driving at night.  Having both a smartphone and iPad makes it easy to have a private phone call and research something at the same time in the web browser.  The iPad’s large screen makes it possible to use Maps to view more of what’s around and also see the map at the same time as searching for destinations.  Picture-in-picture on iPad OS makes it possible to watch music videos while also browsing websites.  And having a cellular iPad makes it easy to use iPad as a portable wifi hotspot.

Tesla’s Model 3 set the standard for what a modern in-car dashboard should look like.  Instead of a bunch of separate lights and mechanical buttons, everything should really be consolidated into one high-resolution touchscreen.  More and more automobile brands, and after-market car stereo makers, are copying that form factor.   But revolutionizing in-car interfaces is so much more complex than adding a touchscreen.  There’s also the usability aspect, integration with the various hardware components of the vehicle (speedometer, fuel gauge, etc.), and need for add-on apps like maps and music.  Every vehicle manufacturer making their own dashboard interface is also inefficient.  There’s absolutely an opportunity for a company like Apple to become the standard for vehicle interfaces the way Apple revolutionized smartphones.  Having used it consistently over the past several months, I’m convinced iPad-in-the-car is the standard vehicle interface of the future.